Star Trek The Official Starships Collection is currently unavailable to new subscribers. Register below and we'll let you know as soon as it's available again

The USS Enterprise (NCC-1701-D) was a 24th century Federation Galaxy-class starship operated by Starfleet, and the fifth Federation ship to bear the name Enterprise. During her career, the Enterprise served as the Federation flagship. The Enterprise was destroyed during the Battle of Veridian III in 2371

The U.S.S. Enterprise NCC-1701 was an iconic Constitution-Class Starfleet vessel famously under the command of Captain James T. Kirk for his initial five-year mission (2265-2270) and served for 40 years in the Federation until it was deliberately destroyed above the Genesis planet to keep it out of Klingon hands.

The Klingons applied several class designations to the different types of their Bird-of-Prey design, including the K'vort-class, B'rel-class, and D12-class. The D12-class was retired from service by the 2350s due to faulty plasma coils, which were components of the cloaking systems

One of the most important starships in interstellar history, Enterprise (NX-01) was the culmination of the NX Project. The NX-01 was the first NX-class starship, launched by the United Earth Starfleet in 2151

Issue 5 of Star Trek The Official Starships Collection features one of the most intimidating ships that Starfleet has ever encountered: the Imperial Romulan Warbird. Memorably decloaking in the Neutral Zone ahead of the U.S.S. Enterprise NCC-1701-D at the close of TNG's first season, this D'deridex-class ship posed a significant threat with its six disruptor cannons and two photon torpedo launchers.

The model of the Klingon battlecruiser is based on the Star Trek: The Motion Picture version. Like the Enterprise, the Klingon ship got a major upgrade for its appearance in the first Star Trek movie, with new design work done by Richard Taylor and Andy Probert. This version has much more surface detail than its original series predecessor, but has a simpler, gunmetal paint scheme than the CG version that appeared in Deep Space Nine over 20 years later.

This model is die-cast, hand-painted, and comes with an in-depth magazine featuring product artwork and highlighting the ship's history and design.

The U.S.S. Excelsior made its debut in Star Trek III: The Search for Spock and was always intended to be an advanced vessel that made the Enterprise looks old. The ship underwent some changes when it reappeared in Star Trek VI: The Undiscovered Country under Captain Sulu's command and this is the version that the model replicates. As well as the usual profile, the magazine takes a look at the rejected study models that ILM's Bill George built as part of the design process.

This version of the Borg Sphere is the one that appeared in Star Trek: Voyager. The complicated surface detailing provided a real challenge for the model-makers and resulted in one of the most intricate models in the collection. Find out the story behind the design of the Borg Sphere for STAR TREK: FIRST CONTACT and how Industrial Light & Magic created a 2 feet studio model of the ship. The magazine takes an inside look at how the Borg assimilate their victims and the design process behind both the Borg Sphere and its mistress, the Borg Queen. With some rare photographs of the studio model and a profile of the ship.

Miranda-class vessels, such as the U.S.S. Reliant, were used primarily for science or supply assignments rather than extended exploration missions. As such, they were equipped with a host of scientific scanners.

This fan favorite made its debut in STAR TREK: FIRST CONTACT. The Akira class is the first-ever officially licensed model of the incredibly popular little ship. It is taken directly from the CG model made by ILM. The Akira class was named after the cult Japanese anime film, Akira (1988) - Set in the future, this animated cyberpunk film features biker gangs and characters with psychic abilities.

The Jem'hadar Battlecruiser is one of the larger ships that the Jem'hadar used on Star Trek: Deep Space Nine and is the equivalent of a Starfleet Galaxy-class vessel. The first version that appeared on screen was a physical model, which was then replaced by two subtly different CG versions, and the die-cast model is based on the last of these.

Issue 14 of the collection brings fans the workhorse of the Cardassian fleet – the Galor Class. The Cardassian Galor Class is the most familiar design of Cardassian warship. The die-cast model is based on the Lightwave version that was used on Star Trek: Deep Space Nine, but has also been compared to the original physical studio model that made its debut on Star Trek: The Next Generation.

The U.S.S. Equinox appeared in Star Trek: Voyager's fifth season finale. It was a smaller ship than the U.S.S. Voyager and had also been stranded in the Delta Quadrant by the Caretaker. In the face of impossible odds, her crew had taken some moral shortcuts in an effort to get home. The die-cast model is based on the original Lightwave model that was created for the two-part episode by Foundation Imaging, but has been cleaned up to show the ship in pristine condition. The magazine takes a look at the Nova class and Rick Sternbach's original concept drawings.

Issue 16 of the Official Star Trek Starships Collection is the Ferengi Marauder - the first major alien ship to be built for Star Trek: The Next Generation. The ship was designed by Andy Probert, who was inspired by the shape of a horseshoe crab, and was intended to rival the Galaxy-class U.S.S. Enterprise NCC-1701-D.

Issue 17 is the U.S.S. Dauntless - a mysterious ship that the crew of the U.S.S. Voyager encountered thousands of light years from home in the Delta Quadrant. At first glance, the U.S.S. Dauntless was an advanced Starfleet vessel, fitted with a Quantum Slipstream drive, which could bring the crew home in a matter of months. The reality turned out to be rather more sinister...

Issue 18 of Star Trek The Official Starships Collection is one of the most unusual and beautiful designs ever created for Star Trek - the Bajoran Solar Sailor or also known as the Lightship. This ancient design of ship was designed to ride tachyon streams that enabled it to cross vast distances at great speed. The original model was one of Star Trek: Deep Space Nine's first experiments with CG starships and has been carefully reproduced from the original concept drawings.

Issue 19 is the U.S.S. Stargazer, the ship that Picard commanded before the Enterprise-D and a rare example of a Starfleet vessel from the early part of the 24th century. It's also unusual in being one of a handful of Starfleet ships that has four rather than two nacelles and, as the magazine reveals, it started life as a piece of set dressing rather than a fully-fledged design for a starship.

The Vor'cha was the first Klingon ship that was specifically designed for Star Trek: The Next Generation. It made its debut in the fourth-season episode Reunion, when it was introduced as the Klingon Empire's new flagship. The die-cast model is carefully based on the original studio model, and carries the original TNG paint scheme rather than the more colorful version that was used when the ship appeared on Star Trek: Deep Space Nine.

Every model comes with a special collector’s magazine that provides an in-depth profile of the ship, with detailed annotations, and a breakdown of the technology on board, its crew and weapons.

In-depth profiles provide invaluable information about the ship, her technology, crew and capabilities.

Take a look at the original design sketches for the ship and hear from the designers as they explain exactly how the design of the ship evolved.

Although there might only be one onscreen version of the ship there were often multiple studio models that were used for filming, each of which was subtly different from the others.

Every magazine ends with a brief history of the ship’s onscreen appearances, listing it’s first appearance, who designed the ship, and identifying key moments in its history.

Take a closer look to the XL Editions 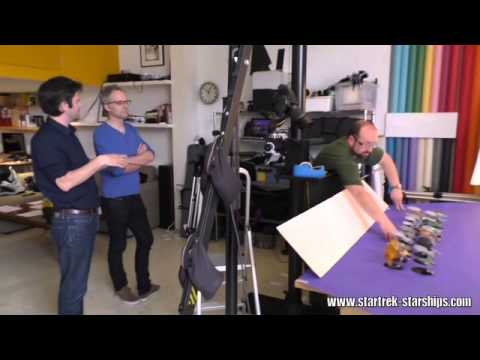 Can I get the free gifts without subscribing?

These gifts are exclusive to subscribers, but if you would like to subscribe you can do so via our subscriptions page.

What methods of payments do you accept?

You can pay by Paypal, Direct Debit, Visa, Delta or Mastercard. Please call our customer services team on 0345 155 6380 to make the arrangements.

View All
I have not received all my issues, can you help?

Our Customer Services team can sort this out for you. If you email the team, please include your name and subscription reference number in the subject line.

I have received the wrong issue/s.

We will replace all of your issues with the correct copies. Please post your incorrect copies to: Star Trek Starships, Database Factory, Unit 4, Pullman Business Park, Pullman Way, Ringwood, Hampshire, BH24 1HD. Alternatively, you can contact our Customer Services Team on 0345 155 6380 or email [email protected] Please include your name and subscription reference in the subject line.

You can cancel at any time. If you would like to cancel your subscription via email or post please click here to fill out the cancellation form or alternatively please contact the customer services team on [email protected]

I can't find copies in the shops – help!

You can ask your newsagent to place a regular order for you so you can pick up your issues from them. If you need back copies you can ask your newsagent to order them for you or just contact our Customer Services team. Don’t forget if you take out a subscription, issues will be delivered direct to your door free and you get 5 great gifts. Full details are given on the subscriptions page of this site.

I can't get through on the phone number given.

We have several lines dedicated to helping you, but they can be busy at peak times so please keep trying. Alternatively, please email our Customer Services Team at: [email protected]

How can I get back copies?

To order back copies, please go to our online shop where you can buy individual issues that are no longer available in newsagents. Alternatively, you can call customer services on 0345 155 6380. Please note that it can take up to 21 days to deliver your back copies.

How can I get copies if I live outside the UK?

I am sorry, this collection is only available in the UK, Ireland and USA at the moment.

I can’t see some of the pages on the website. Help!

It may be a temporary problem, so please click Refresh to reload the page. If you are experiencing problems getting through to the secure order area when trying to place a subscription order, please email us on the customer service website enquiry email address:[email protected] or call 0345 155 6380.

How many issues are there?

We have planned 180 issues for this collection.

How much is each magazine?

What day is the collection on sale?

What is the contact number if I am calling from Ireland?

Shop @Eaglemoss for great value on the largest selection of licensed collectibles and tools for creative pursuits. Your satisfaction is guaranteed with risk free trial-offers, hassle-free returns and 30-day money back guarantee. Privacy and security are always our priority.